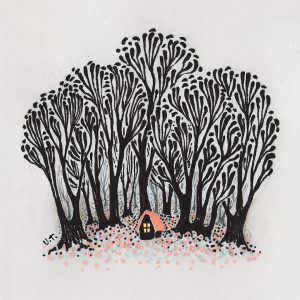 I’ve been thoroughly enjoying this year’s Inktober, and thought I’d share some of the inspiring illustrations I’ve come across during the past few weeks.

As a general rule, it’s the black & white artworks that tend to be the ones that catch my eye (perhaps it’s the sketch-like, quickly inked, responsive nature of them that seems so in keeping with the spirit behind Inktober that I like about them), though you can see a little colour creeping into a couple the pieces I’ve selected. They’ve made me realise that a splash of colour can, however, make all the difference!

I’ve not had the chance to take part this year, but I’m determined to give it a go next time. PS. I do love the list of prompts for this year! 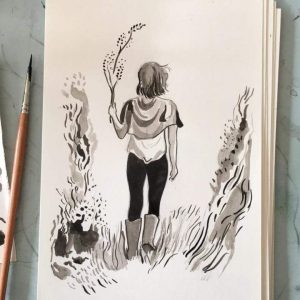 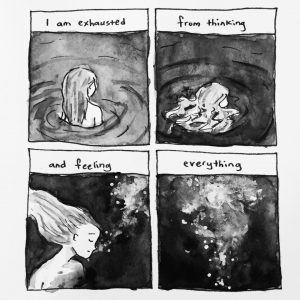 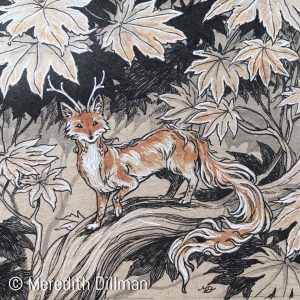 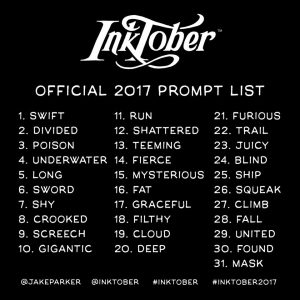 This Owl managed to secure a pre-order of the Nintendo SNES Classic Mini way back when they were first announced. I was actually walking through Birmingham at the time, and I managed to get one as I was walking. I was lucky, as they pretty much disappeared (until yesterday, launch day), with silly money exchanging hands just for a guaranteed pre-order. Pussycat has been most amused at how much I have been looking forward to this coming out, and my frequent showing her how ‘cute’ it is.

I previously managed to get a NES Classic Mini too, at the time no one really knew how rare they would become and despite being tempted to sell it for megabucks, I have so far resisted. The NES Classic Mini was quite disappointing, it looked nice, but it only came with a single pad, and that pad was constrained by a ridiculously short cable.

The SNES is a different beast. There’s more games that I am fond of, which helps, but the major factor with it is it comes with two pads bundled with the system, and those controllers have slightly longer cables. The first game I played was the one I was most looking forward to playing again, after many many years. Super Mario Kart.

It was amazing how quickly you get back into the swing of things mostly from muscle memory! 1st in all the Mushroom cup races on my first attempt! After that, a bit of Street Fighter 2 Turbo (still terrible at it), first level of StarFox (its still amazing) and finally a level or two of Super Mario World.

Going forward, I’m really looking forward to playing (and finishing) Zelda: A Link to the Past (A game that I never really got into the first time round), and Donkey Kong Country (A game that I finished with more than 100% complete – still proud of that!) and controversially, Super Mario World 2: Yoshi’s Island – which I think is better than the original. Even now, it still looks incredible. I still remember looking at it 1996 when it came out and thinking the graphics were amazing. Of all the SNES games (bar the excellent Unirally, RIP) I still think it looks incredible.

Time will tell if the hype is all that for the SNES Classic Mini, and I say this as an Owl who has almost permanently had a Dreamcast hooked up to the TV since 1999 and never owned anything past the Xbox 360.

This weekend was London ‘Open House’ weekend. I had managed to get tickets for two things I’ve wanted to do for a while after seeing them online in various forms, 1) Visit a crossrail station (I’ve been lucky enough to have visited the tunnels, and that was incredible) 2) do a tour of St Pancras station. This weekend I managed to accomplish both!

The Crossrail station visit with my friend was on the Saturday at Canary Wharf station, the one which is apparently most complete so far, so no hard hats required (Although I did spot that all the staff members had them on..). The tour itself was somewhat self guided, you check in and head down the extremely yellow escalators pictured above. I’m not so keen on the Yellow. I am hoping that perhaps each crossrail station will have its own distinct ‘colour’ and Canary Wharf is this for a reason. If all the crossrail stations are like this, I’ll be disappointed I think. From a purely aesthetics point of view anyway. My friend made a good point that they should be crossrail purple, with canary yellow birds on them. That would have looked wonderful!

One thing I do love about ‘Crossrail Place’ as it is known, is the aesthetics in general. The roof garden is absolutely stunning and a lovely little quiet spot over the weekend to come to and sit. Mid-week I expect it is chock full of the local office workers trying to grab lunch not sat at their desks (and who’d blame them?). But on weekends its usually awfully quiet. I also really like the bridge that connects you to the rest of the Canary Wharf area, it is futuristic and almost Tron-like in its appearance. There is also an Ole & Steen there too, which is always a bonus. If you haven’t come across them yet, they’re a chain of Danish coffee shops. Expect Danish prices, but high quality.

On Sunday however, Pussycat and I had a tour of St Pancras station. It wasn’t entirely what I was expecting from the ‘Open House’ series, which is generally going somewhere you can’t or touring an area offlimits to your average visitor. Instead this was an hour long tour of the publicly accessible places in the station. Our tour guide, Mike, did an excellent job in herding the 25 or so of us on the tour around the building and giving away some of the secrets of the past.

St Pancras was opened in 1868 and was run by the Midland Railway company. Its interesting to think that these days people generally see London as being the big draw in the country, and any national infrastructure project *cough* HS2 *cough* is seen as being emanating from London and going northwards. But most of the London terminals were built when the powerful North of England, with its mighty victorian industries, wanted a slice of the capital, and they all raced to get their lines to meet the thames (or as close as they could be, approximately Euston Road – but no further!).

Mike took us through some of the engineering marvels that William Henry Barlow created by engineering the station. One of which was the pillars which make up the lower section of the station. These were deliberately at around 14 to 15ft in distance apart, which at the time was the exact size of a beer barrel. The entire ground space (as the station is elevated to get over a canal) was used for beer storage by the Bass Brewery of Burton on Trent. Handily, it shared some directors with the Midland Railway company! I especially liked finding out that there is an expansion gap at the top of the roof of just over 1ft in length. Now that is a staggering feat of engineering, in-line with that of Concorde’s hot/cold expansion capabilities! Infact, allegedly Barlow said of the gap something along the lines that he ‘loved the idea of St Pancras being like a giant breathing animal’.

Some other bits of interest were the Minton tiles which adorn the walls (pictured at the very top of this post), and the fact that over 60million face bricks were used in the construction of the station! Each brick with just a 1/4″ mortar work too, so precise was the order that teams of foremen went around measuring the work. Mike our guide also told us an incredible tale about the clock, which I thought was an original piece but it isn’t. The tale is told here on the website of Sally Kindberg, who tells it much better than my 2nd hand retelling ever would! 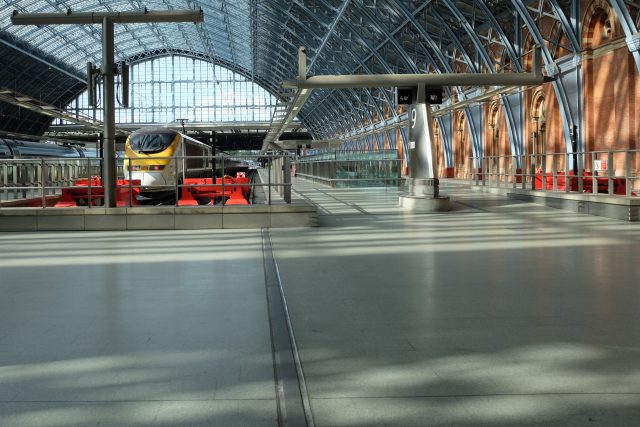 One thing that was made a point of in the tour was that the 10th birthday of Eurostar services coming to St Pancras is nearing, and I personally can’t believe how time has flown! I don’t even remember how the station used to look, despite using it more than 10 years ago to get to London from my home the North on several occasions. 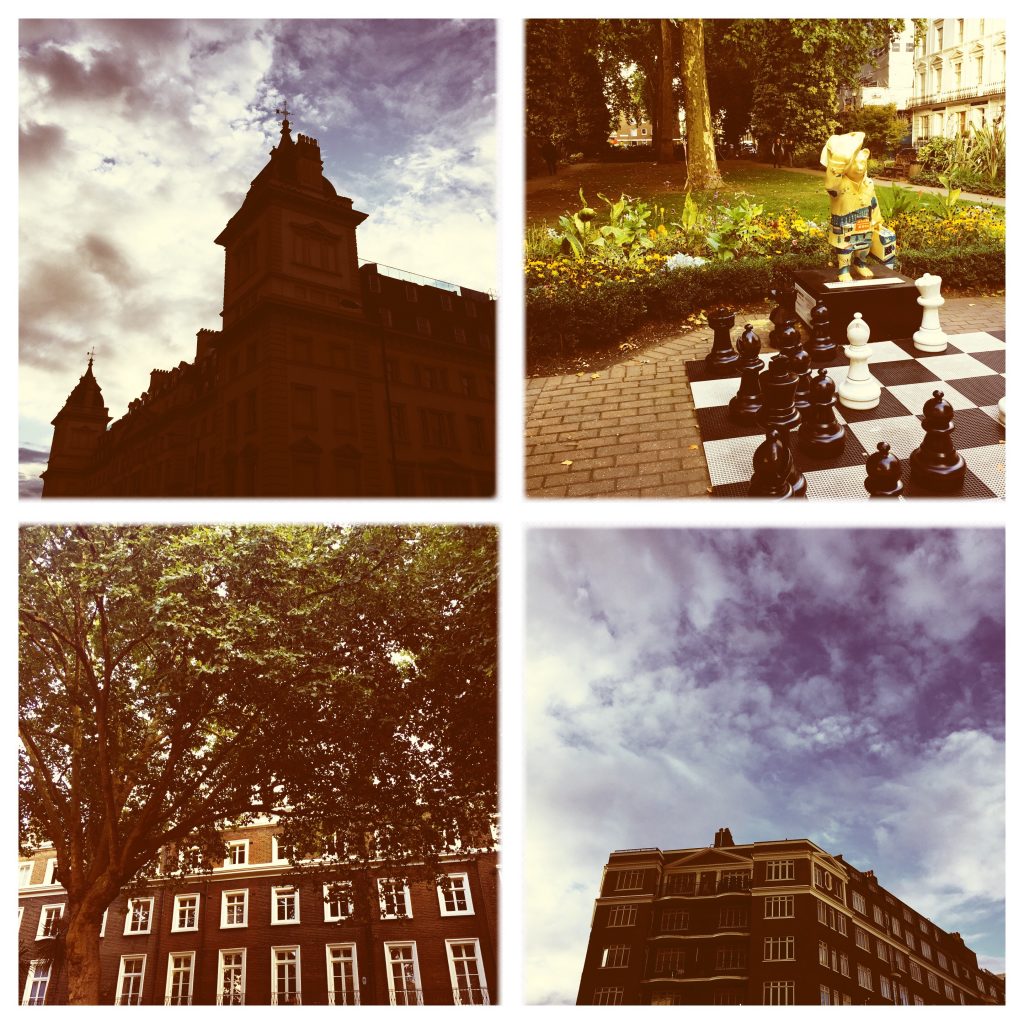 Now this might end up being a regular feature, it may not. But, one of the original ideas for the blog was sharing little hints and tips we have come across, or places we think our readers might enjoy. As we’re based in the South East currently, we spend a lot of time near, on or around the Thames, so Thames Tips it is (and I do like a bit of alliteration). The first tip I wanted to share was around not always taking the tube when you are visiting London to exactly where you need to go. Sometimes it actually has several benefits, but one in particular is (for me anyway!) particularly useful.

Lancaster Gate to Paddington. Now on the tube map (look at a tube map for this, as it’s mad) it looks like it is utterly miles away from each other. In reality, its a super short walk – about 5 minutes (almost the time it takes to walk from the front of Paddington to the Circle/H&C, and about the same time it takes to get down to the Bakerloo if you’re at the back of a GWR service. The benefits are especially good here –

Others that I have used –

Another 5 minute one, avoiding a really busy station full of wandering tourists with M&M world bags.

Just a nip over a bridge, but connects the Circle lines with the Jubilee and is probably faster than walking to Bank from Monument if you’re trying to connect that way somehow!

When Walt Disney opened his ‘Magic Kingdom’ of Disneyland in 1955 he uttered these immortal words;

To all who come to this happy place; welcome. Disneyland is your land. Here age relives fond memories of the past…and here youth may savor the challenge and promise of the future. Disneyland is dedicated to the ideals, the dreams and the hard facts that have created America…with the hope that it will be a source of joy and inspiration to all the world.

Whilst our little blog probably doesn’t deserve such grandiose introductions, the spirit of that introduction rings true for us. This blog will be filled by our musings, as we sail the world in our (metaphorical) pea green boat. We’ll bring you things from history, stories from the present, and visions of the future yet to be. We are the owl, and the pussycat, and both our monikers (and the title of this blog) were inspired by the Edward Lear poem.

Either way, I hope you enjoy this little corner of the internet.